CELEBRATE THE RAAF CENTENARY WITH YOUR VERY OWN FLYPAST

Australia is the planet's sixth largest country and accounts for five percent of the world's land area at 7.692 million km is the world's largest island.

Along with a total coastline of some 59,736 kilometres, it’s little wonder aviation has been an integral part of the nation’s climb from far-flung outpost into today’s vanguard of industrial and economic strength.

Air space above a land of plenty, safety, and integrity that has been bravely defended by the Royal Australian Air Force for the last hundred years.

Celebrating its centenary in Canberra on the 31st of March, the Air Force has planned a spectacular flyover with sixty planes and the changing of colours at Government House – a magnificent ceremony that will be televised by the ABC from 10am – 12pm on the day. This will be first of many events culminating in a special aerial display at the Avalon Air Show in November.

To ensure comprehensive coverage of their centenary, The Royal Australian Air Force has engaged BrandNet to help merchandise its 100-year commemoration, who has commissioned an Air Force Centenary Artwork.

With the support of the Chief of Air Force – the painting will bear his poignant centenary message – the original work is a triptych with each of its three parts measuring 1 metre X 1 metre and will be a significant asset to Air Force HQ, where a reproduction is earmarked to be hung.

BrandNet has also worked with Air Force to include a small disc of metal from the first F/A-18 fighter jet ever flown in Australia, which will be placed on the engraved inscription plate of the first one hundred full-sized reproductions, as shown below.

So that all Air Force personnel, their families, friends, corporate suppliers and supporters can enjoy this magnificent visual history of the last 100 years of Air Force, a selection of high quality and framed limited-edition reproductions are being released for display in military messes, museums and corporate buildings, with smaller versions being made available to the general public. 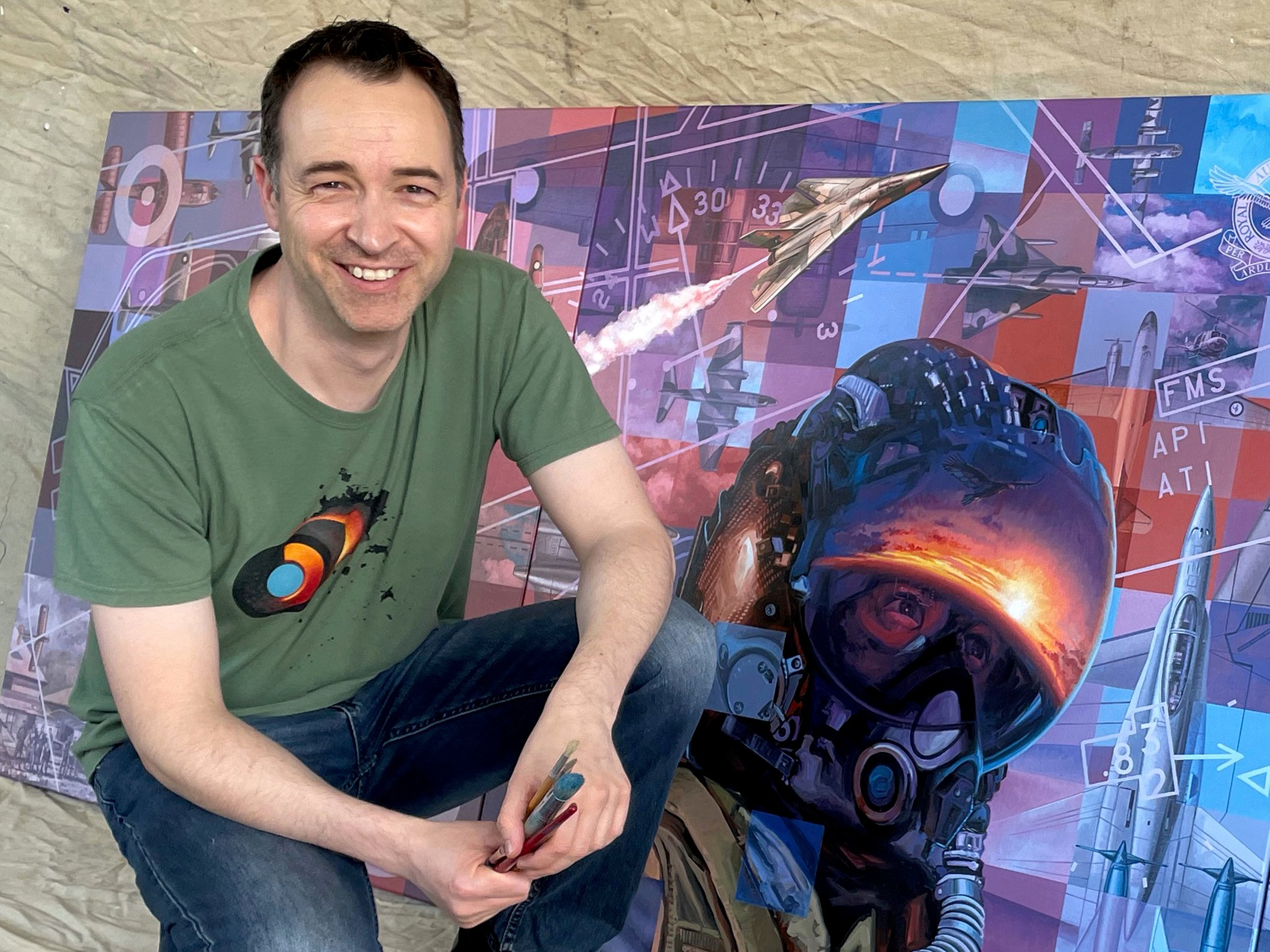 The creation of Drew Harrison - one of Australia’s leading military and aviation artists – this modern masterpiece is entitled ‘Then. Now. Always.’ and has a visual narrative that tracks from bottom left to top right across all three panels - beginning with the origins of the RAAF at Point Cook in 1921 and leading up to the current expansion into space in 2021.

‘I have taken cues from the RAAF 100 logo imagery and the phrase THEN-NOW-ALWAYS. The design is split into a triptych containing three individual canvases that reflect this transition of heritage. At the centre of the composition is a single pilot figure. This unifying element is intended to represent all the invaluable personnel who have contributed to the Air Force’s fabric.’ Said the artist.

Managing Director of military marketing experts, BrandNet, Stephen Davie said, ‘Then. Now. Always.’ is a truly outstanding piece of military artwork – one that pays homage to the heritage of our magnificent Air Force and treasures the courage and technological advancement that has taken us from here to the stars in just one hundred years. The opportunity to own a high-quality reproduction of this stunning image is one not to be missed in the Air Force’s centenary year.’

These high-quality reproductions are printed and treated to last for more than 75-years and come in a variety of configurations and prices:

Go to MilitaryShop.com.au/Centenary now to select your preferred limited-edition number before they are all sold out.