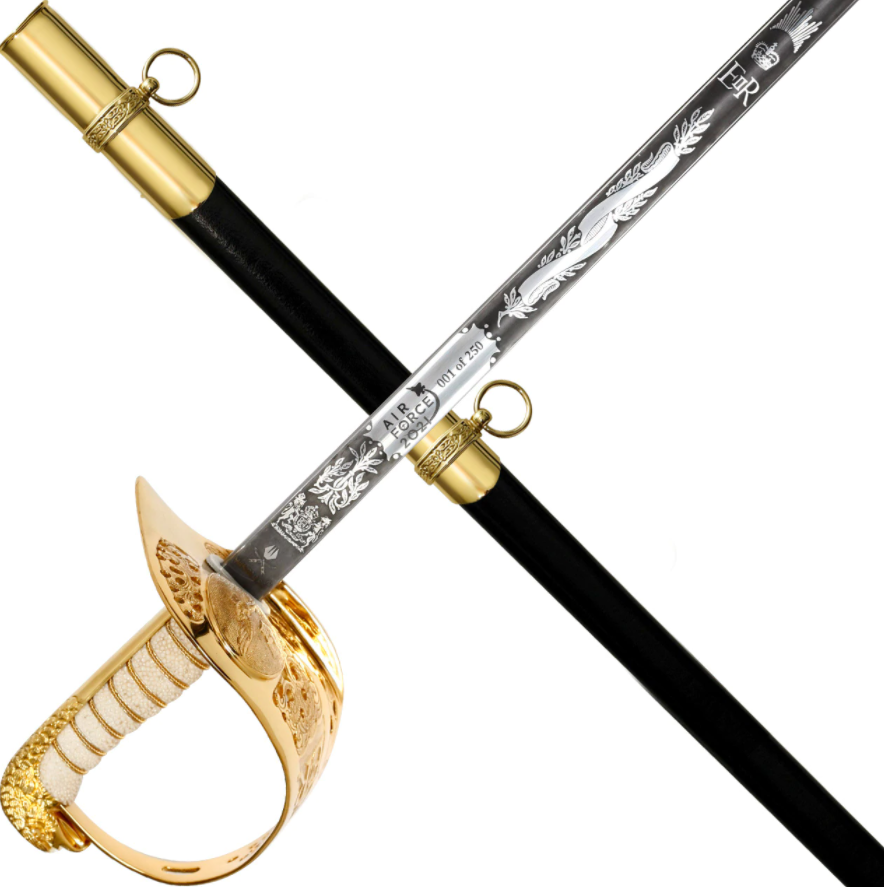 Chivalry Above the Clouds.

Military Pilots were first called ‘Knights of the Air’ by LT Bennett A. Molter in his 1918 treatise on aviation. As everyone knows, Knighthood comes with a sword.

So it was in 1925, that the Air Ministry of the United Kingdom, decreed all RAF officers with a Queen's commission would deserve the same treatment.

Though swords for officers had been part of the military for millennia.

Captain John McGrath, RN - a retired officer with a lifelong interest in naval swords co-authored with Mark Barton, the seminal ‘British Naval Swords and Swordsmanship’ in 2013.

In it he tells us that the first swords with an indisputable military and maritime provenance were recovered from the wreck of the Mary Rose, which sank at Spithead off the coast of Portsmouth, England in 1545, whilst engaging the French in battle.

Among the many weapons recovered from the mud of the Solent were an array of basket-hilted broadswords that almost certainly belonged to officers, as there was no mention of swords in the long list of stores held on board.

Later in the sixteenth century the sword attributed to Sir Francis Drake (still owned by the Drake family and on loan to the Wardroom of HMS Drake in Devonport, as seen below) is characteristic of a high-quality fighting sword of the period.

In the first half of the eighteenth century, the most popular style of sword carried by military and naval officers in particular, officers was a short weapon with either a curved or a straight blade. Referred to today,  as hangers and hunting swords respectively these sword types generally had a rounded pommel, a simple knuckle bow and a turned down, shell shaped knuckle and hand guard.

From both an Australian perspective, the most interesting example of these types of officer’s weapons is the silver-hilted sword of James Cook, now preserved in the State Library of New South Wales, as shown below.

It’s important to remember that up to the end of the eighteenth century every gentleman wore a sword and military officers were no exception.

As service swords became more and more prevalent in the ranks of military officers, short, curved fighting swords became popular, and these often had hilts with ebony grips. Sometimes bound with copper tape, with guards, two side bars, and olive shaped pommels, they were mainly unadorned, though the one below is one of the first to show some inscription and decoration, reading, ‘WARRANTED NEVER TO FAIL 1791’, which firmly dates this fighting sword.

Around this time, numerous designs - reflecting both the tastes and the pockets of their owners – began to appear , with probably the best known from this period being the five ball sword - named for its globules on both the knuckle guard and the side ring.

It was in 805 that the attitude towards swords began to change, when two distinct and important patterns were introduced.

For officers of commander’s rank and above, it became common for them to wear an ornamented sword with a cut and thrust spadroon blade, a gilt stirrup hilt with langets, (a fouled anchor if the wearer was Navy) a white ivory grip, and a pommel in the form of a lion’s head.

For Navy Lieutenants and below there was a plain version with a grip covered in black fish skin and a plain, rounded pommel.

The blades of these were only rarely blued and gilt, with any decoration being confined to bespoke engraving by the officer himself.

These swords seem to have been created from a mish-mash of previous sword designs and included style cues from such models as the 1796 Pattern infantry sword combined with the stirrup hilt of the 1796 Pattern light cavalry sword and the lion’s head pommel of the 1803 Pattern for grenadiers and flank companies.

In 1822 the Army introduced a completely new sword for its infantry officers and the RN followed suit with a very similar weapon five years later, and it is this sword shown below, that the main features of today’s weapons become clearly recognisable.

1827 Pattern  sword worn by all Army, Navy Officers and midshipmen.

The blade was of a style known to modern collectors as pipe-backed, ramrod-backed or quill-backed, and was supposed to be equally good for cutting as for thrusting.

However, unlike the Army’s version of this sword, which was open and had proved fragile in combat, the Navy’s sword replaced the ivory with a wooden core covered in fish skin, with the lion’s head pommel has retained but in a more naturalistic form, as show here.

Flag officers swords were distinguished by bands of oak leaves among the engraving on each of the scabbard mounts. However, in 1831 the Army adopted a mameluke-hilted dress sword for its general officers and the Navy followed suit in 1842 with a similar sword for optional wear by flag officers as seen below.

Whilst this pattern was withdrawn in 1856, there is evidence that officers promoted after that date continued to wear it.

Eventually the Army replaced the thoroughly inefficient pipe-backed blade by a flat-backed design in 1845, and a year later, again the Royal Navy followed suit.

The resultant sword is still with us today but with a narrow, straight blade rather than the earlier slightly curved and broader weapon, as seen here.

During this time the Crown which accompanies the fouled anchor in the designs in the cartouche on the guard and etched on the blade. Were most frequently the Tudor Crown and the St Edward’s Crown, which been used as the regal crown by Queen Elizabeth II, Queen Victoria and the monarchs preceding her, and is known as the Queen’s Crown.

The arches of the Tudor Crown rise towards the centre to support the orb and crown, and this design was used by Edward VII, George V, Edward VIII and George VI., and is referred to by  collectors as the King’s Crown.

The Sovereign chooses the regal crown and it will be interesting to see which design is chosen by Prince Charles on his eventual accession.

Because the Royal Australian Navy has kept to the design of the Royal Navy sword, it is only if there is some additional evidence, such as a name engraved on the guard or family tradition, that a vintage sword can be linked with any Australian provenance.

One interesting exception to this general rule is the sword of Captain Edward Richard Connor, CMG, RN. His sword, with its blade etched for the New South Wales Naval Brigade, as shown below is still proudly owned by his great grandson.

The craftsmanship of these sword  is truly remarkable – testament to their quality, durability and tempered faculties that so many exist in the hands of museums and collectors in Australia and the world in general.

One of the greatest manufacturers of the modern-day version of these heritage swords in Windlass Steelcrafts – the maker of The Limited Edition AF 100 Sword.

A word about Windlass

The seeds of Windlass Steelcrafts were sown by a young motivated Indian named Ved Prakash Windlass in 1941, when he began a small undertaking to supply “Kukris” to the British Gurkha Regiments in pre-Independent India – winning its first British government contract. Windlass were subsequently commissioned to build ceremonial military sword, which it continues to do so to this day – supplying governments across six continents, with military supplies such as dress sabres, combat knives, personal regalia, kukris, and army-grade textiles. One of their most proud and prized designs is a sword to commemorate the centenary of the Royal Australian Air Force.

The Limited Edition AF 100 Swords as featured on MilitaryShop.com 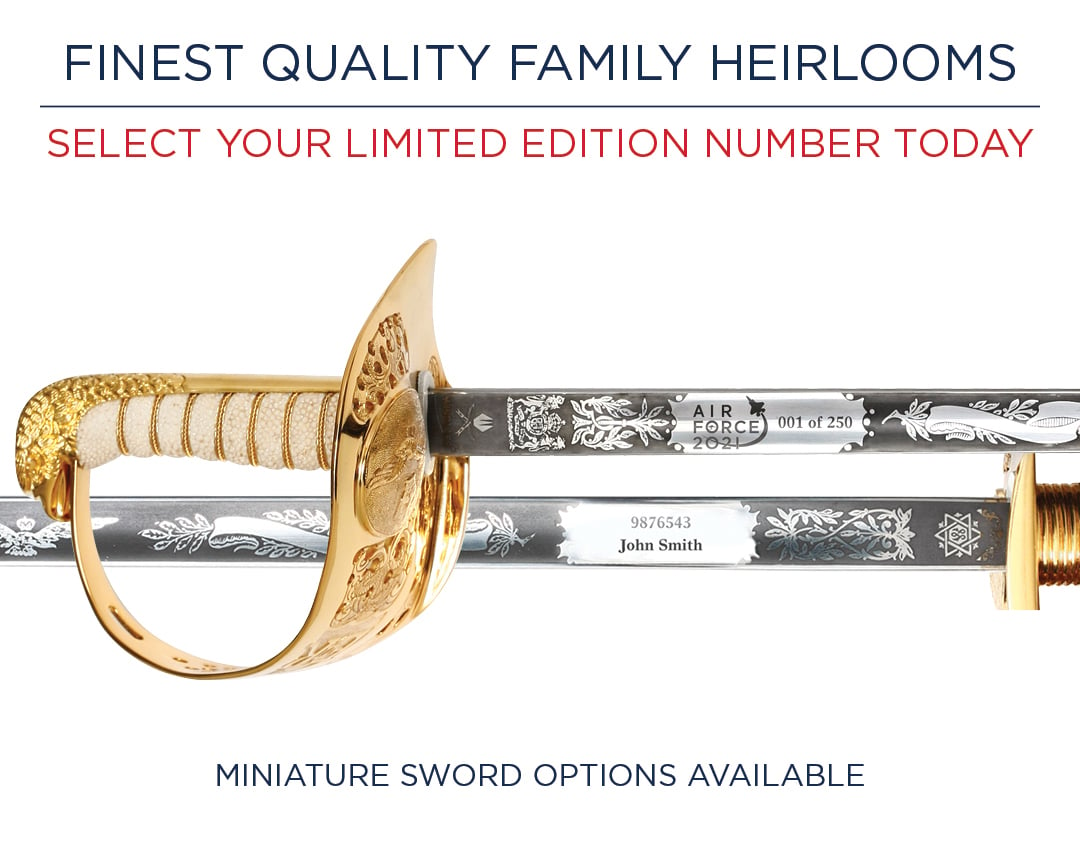 Along with the many traditions adopted by the Australian services, the patterns, designs and markings of the British Army and Royal Navy were widely appropriated.

Carried by RAF Commissioned Officers since its design and adoption by the Air Ministry in 1925, the AF 100 sword has a single-edged straight blade with gold-plated brass hilt, white fish-skin grip and a brass pommel in the form of an eagle.

In honour of its provenance and contemporary use today in the RAAF, this special edition of the original British Air Force Officer’s sword of 1925 has the Royal Australian Air Force Centenary logo and limited edition number etched into its blade.

Each sword is meticulously forged from stainless steel, hand ground and finished, with the pattern on its stamped, gold-plated brass cartouche bears the authentic albatross emblem of the RAF.

Military Shop would like to acknowledge and thank Captain John McGrath, RN for the information contained above. For more information on the history of military swords, please refer to the important book list below: