Give a Toss. Every Penny Counts

For Australia’s veteran organisations the Anzac Day period is a busy time. As well as being part of commemorations on 25 April, most are knee-deep in organising fundraising stalls and volunteers to raise much needed funding to provide services to members and the community.

The team behind Military Voice has been supporting local veteran charities for decades and has worked with many to create great historic products that share a pride in service and that have inspired fundraising sales. But one of the big issues that continues to dog fundraisers everywhere is finding people to cover the stalls. 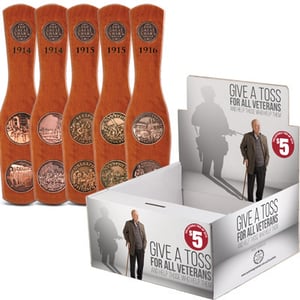 This year Australia in the Great War introduced the ‘Give a Toss’ for veterans campaign for clubs and fundraisers. Hopefully this campaign, which uses the AGW pennies and two-up kips, will generate even more sales.  It was designed to allow supporters – local businesses and sporting clubs – to get involved by selling a box of two-ups or pennies for their charity. AGW have slashed the cost of the products for the fundraisers to maximise sales and generate funds for veteran charities.

Every year when we talk to thousands of fundraisers they say they are finding it harder to get people to run their fundraising stalls or street appeals. The issue is simple – members are getting older and although they are keen to support their club and members, many just cannot physically manage a full day’s fundraising.

In you have a link to service or simply have a pride in the service of others you can help. Find your local Legacy, RSL, Nasho details online and get in touch. If you have a business or sports club talk to them about the Give a Toss promotion.

Whatever help you can offer will be appreciated, and for only a few hours effort you’ll make a huge difference to older and younger veterans and their families.

If you want to find your local charity you can email Military Voice and we’ll put you in touch or you can search the links here.