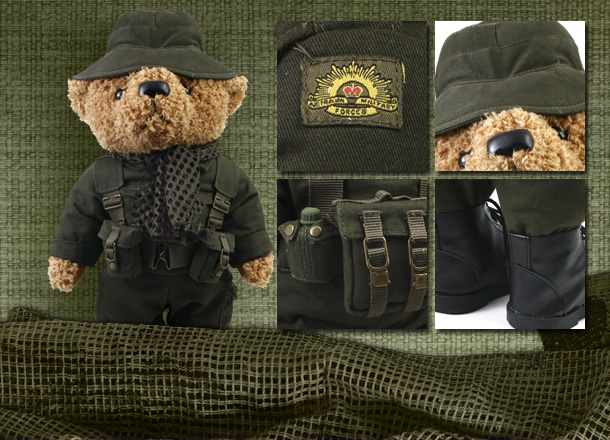 Sharing the story of service in Vietnam within the families of our Vietnam Veterans has been made easier with the release of an exclusive Vietnam Infantry “J” Bear.

While in the 1970s Australia reacted poorly to the return of veterans from the ‘Asian War’, today Vietnam Veterans are honoured in the community and with each passing year pride in their service grows.

“J” Bear is about sharing those stories.

Vietnam was Australia’s longest war of the 20th century. The commitment began in 1962 when 30 military advisors of the Australian Army Training Team Vietnam (AATTV) deployed to train South Vietnamese forces.  But the war escalated and in 1965 an infantry battalion supported by artillery, engineers, armour, signals and other support elements was deployed.  In 1966 this fighting contingent grew again and the 1st Australian Task Force, comprising two infantry battalions, a Special Air Service squadron, combat and support logistic units and additional RAAF Iroquois helicopters, was established at Nui Dat. 1966 also saw young men conscripted under the National Service scheme enter the war.

Five hundred and twenty-one Australians lost their lives during the war. More than 3,000 were wounded and countless more carried home the mental anguish of their Vietnam War experience.

“J” Bear’s uniform represents the typical “Jungle Greens” worn by thousands who served in Vietnam with Australian forces in the 1960s. He wears the iconic “Giggle” hat and carries the standard U.S. M1956 Individual Load-Carrying Equipment with attached water bottles, ammunition cases and field pack.  A larger backpack worn by infantrymen was dropped during ‘contact’ and only the lighter ILCE was worn into combat.