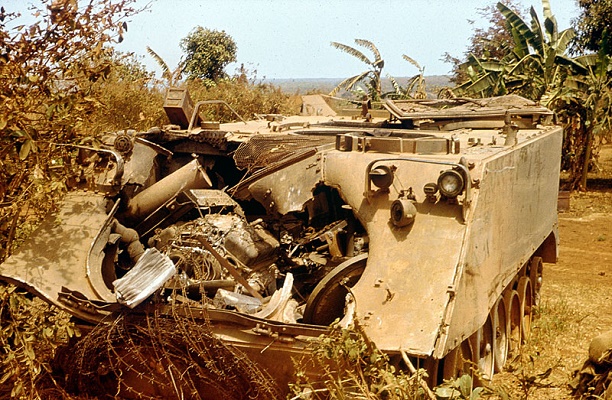 Operation Bribie, Friday 17 February 1967. Was it a loss by Australia? A draw? Or perhaps a victory against incredible adversity!  In the end, after five hours of close-quarter fighting, eight Australians were killed in the action and 27 were wounded. Enemy losses are uncertain but are thought to have been up to 100 dead.

In retrospect, and for many who fought on the day, Bribie was organised in haste with little reliable intelligence. It was meant to be a quick operation to cut off small scattered groups of enemy soldiers who had attacked the nearby village of Lang Phuoc Hai earlier in the day.

Instead the operation, almost exactly six months to the day after Long Tan, resulted in a desperate attack against a determined dug-in force of D445 VC Battalion, augmented by NVA elements, determined to stay and fight, covering the withdrawal of a major enemy Divisional Headquarters.

For the soldiers of 6RAR the conjecture or reflection is irrelevant. They did what all good soldiers do – conscripts and regulars alike.  They took the fight to the enemy – even though for much of the battle most of the enemy remained impossible to see, such was the concealment afforded by their bunkered positions.

The order for Operation Bribie came just before midday.  A Squadron, 3rd Cavalry Regiment was to take C Company 6RAR in Armoured Personnel Carriers and clear and secure a Landing Zone near where the enemy would pass as they retreated to their jungle bases.  A, B and D Companies would come in on choppers.

Hard terrain for the APCs slowed their progress. But A Company landed without incident at the unsecured LZ and moved quickly from the open grassland into the cover of the forest. But within 200 or so metres were set upon by small arms, machine guns and snipers positioned in the trees.  The exact location of the enemy was all by impossible to pinpoint.

B Company arrived next, but to a much warmer reception than A Company had faced just 20 minutes earlier. None in B Coy would have considered being the first Australians to leap from their choppers under direct enemy fire to be an achievement of note. The Coy, under Major Ian MacKay, moved into position ready for orders. The woods were in part patchy and in other areas heavy with dense trees.

6RAR A Coy forward Platoons, after sustaining heavy casualties and being pinned by the enemy for almost 20 minutes, managed drag themselves and the wounded back to safer ground.

The APCs with C Coy on-board arrived at the LZ soon after, followed by D Coy. As the last choppers cleared the area artillery was set on the enemy positions.

Without a clear understanding of the enemy’s locations, and with some thought that it was still "just a camp” the Australians prepared their start lines for the attack.

B Coy launched forward into a torrent of fire from enemy machine guns.  Between the smoke from the fires ignited by artillery, incendiary grenades and the dense foliage, few in the Coy were confident as to the location of the enemy.   B Coy’s 6 Platoon was cut down as it pushed to take out a machine gun position.  5 Platoon suffered the same lot when it tried to outflank the same gun.  The Australians were deep within a horseshoe-shaped ring of enemy positions and machine guns opened fire on all sides. They had advanced only 25 to 30 metres and already half of the men in the forward two sections were down.

Despite all of this Ian Mackay says at the time his thoughts never considered anything other than getting on top of the enemy and silencing their guns and getting his wounded out of harm’s way.

APCs were called in to evacuate the wounded but their advance was slowed by the smoke and fires which made it almost impossible to locate B Coy.  An hour or so after entering the woods the APCs finally moved into B Coy’s position and loaded the wounded. But the enemy had recoilless riflesand rocket-propelled grenades and rounds struck the forward section of an APC loaded with wounded. The driver was killed instantly. The APC commander was wounded, and the men in the back were wounded some more.

With strong covering fire from the remaining APCs the Coys set the crippled APC alight and pulled back to regroup at the LZ.  The battle ended just before 1930 hours.

Next day when soldiers returned the enemy had vanished. The extent of their positions became clear.  These were older defensive or ambush positions created, it is believed, in anticipation of an event such as the one delivered the day before.

Bribie, like most actions in the Vietnam War, is not truly understood or considered by those not connected to service.  Yet it was a battle that again demonstrated the resolve and professionalism of ordinary Australian soldiers – conscripts and regulars – who had to overcome extraordinary hardship.