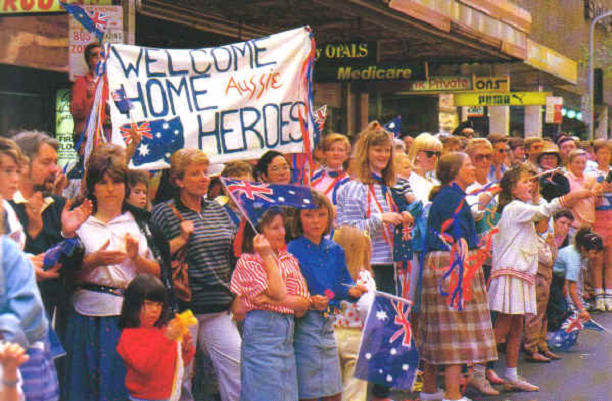 This year is a major milestone for Vietnam veterans. It marks 30 years since the “welcome home” march through Sydney in October 1987.  Such was the bitterness surrounding the Vietnam War and the earlier mistreatment of our returning veterans, that the march organisers were warned not to proceed for fear of trouble from agitators or even worse, complete indifference from the general public.

Yet some 14 years after the last combat troops left Vietnam, the Australian community came out in droves to cheer, wave flags and applaud the parade of about 22,000 Vietnam veterans from Australia, New Zealand, Vietnam, the United States and South Korea.

Reports from the day said many veterans were stunned by the depth of feeling in the public response. They had gone along expecting to meet old mates and to show their pride in having served their country. After the earlier animosity toward their service in Vietnam, they did not expect the massive public show of support. Even the march organisers were surprised by the turnout.

For many, the march was a starting point in a healing process that continues to this day. The formalisation of 18 August as Vietnam Veterans’ Day has its roots in that march. In the crowd of 110,000 was Prime Minister Bob Hawke, who soon after the parade declared that Long Tan Day on 18 August should instead be Vietnam Veterans Day, in recognition of all who served in the war.

In the ensuing 30 years, Australia has embraced Vietnam Veterans, recognising them now as the ‘elder statesmen’ of service. Importantly we understand many mistakes were made in how we cared for this band of Anzacs who served, voluntarily or as young conscripts, in a highly politicised and media-connected world.  Too many have slipped through the cracks. More would have if not for the support of vet associations, mates and families.

Today most veterans are glad to share their stories and experiences, particularly when it can help today’s younger veterans.

For those wanting to connect to the stories of service and sacrifice, we have a selection of Vietnam collections created over the years to honour all veterans and to help families preserve and share memories.